We would like to remind you that we are closed

Blyth Town Council and Northumberland County Council work together to

COVID-19 Important Notice
Due to the current coronavirus situation and other issues, both projects to refurbish Bowes Street and High Street have been delayed significantly. All of the planters were purchased and plants were grown to order, therefore they have been temporarily placed around the town until they can be placed in their final locations on Bowes Street and High Street when the projects are completed. 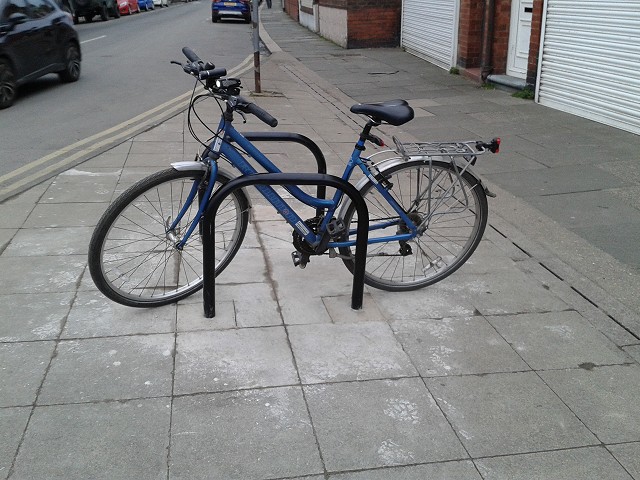 Following a request from resident, Anne Donnelly, for a cycle stand at Newsham, stands have been installed in 4 areas around Blyth.

Anne contacted Blyth Town Council with her suggestion for a cycle stand outside the fruit shop at Newsham as she regularly cycles to the shops.

Councillors Sandra Stanger and Gordon Thompson offered to pay for the stands from their Small Schemes funding and also suggested that stands be installed outside the former Black Diamond, the shops in Newsham Farm Estate and at the One-Stop-Shop in South Beach.

We contacted Northumberland County Council for permission to install the stands and, after discussions, our request for cycle facilities in these areas was incorporated into the County Council’s programme to install additional cycle parking in towns.

Anne was the first person to use the one that she’d originally asked for outside the fruit shop and sent us a photo.  Anne said, “Getting around Blyth by bike is really simple and these new stands make it even easier to support local businesses while I’m out and about.”

Blyth Town Council are committed to improving the environment and conservation.  Northumberland County Council have taken the decision to ban balloon/lantern releases and we support this view.

Balloons and balloon pieces found on UK beaches has tripled in the last 10 years and pose a serious threat to wildlife.   The Marine Conservation Society gives some great tips on safe alternatives to balloon releases as well as a lot of information about the affects they can have on our wildlife. For further information please visit https://www.mcsuk.org/downloads/pollution/dont%20let%20go.pdf

Northumberland County Council also have a great deal of information on their website. This can be viewed by following the links below:

Almost a year since our popular community tree planting event at Meggies Burn, Blyth Town Council bought a further 1,500 trees to extend the planting which was carried out by our Partnership Team on 29 January and 1 February 2021.

A mixture of maple, cherry, hawthorn, hazel, pine, rowan and oak are being added to the stretch planted in 2020.  A wildflower mix will be added to enhance the biodiversity of the area.

We were very disappointed that, due to the current circumstances, we could not hold another community event but hope that there will be more opportunities in a safer future as we are looking at tree planting in other areas. 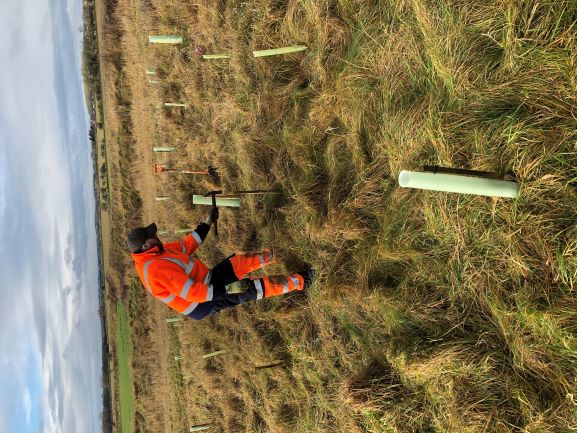 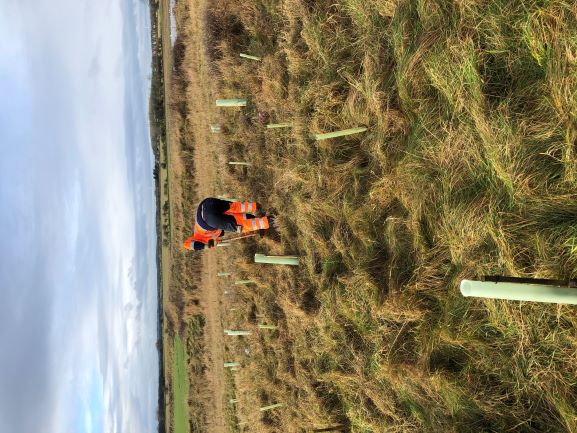 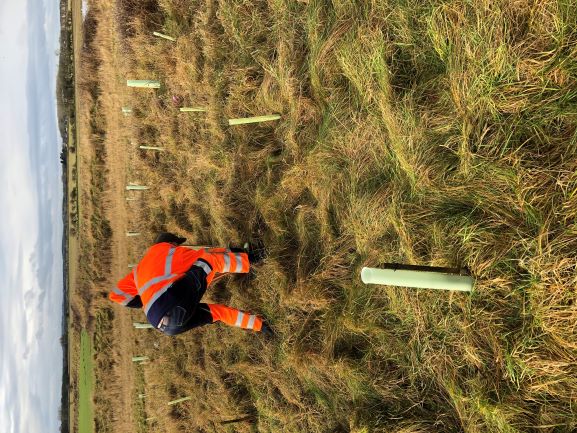 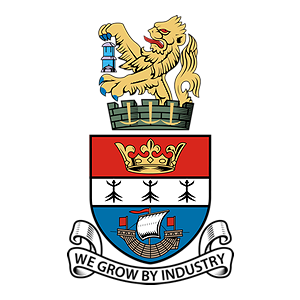 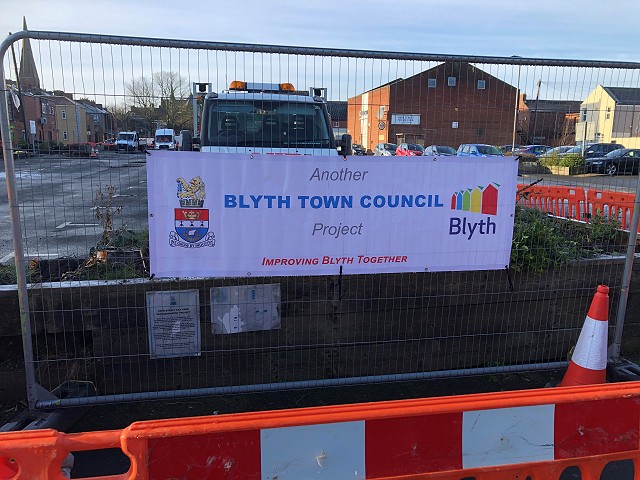 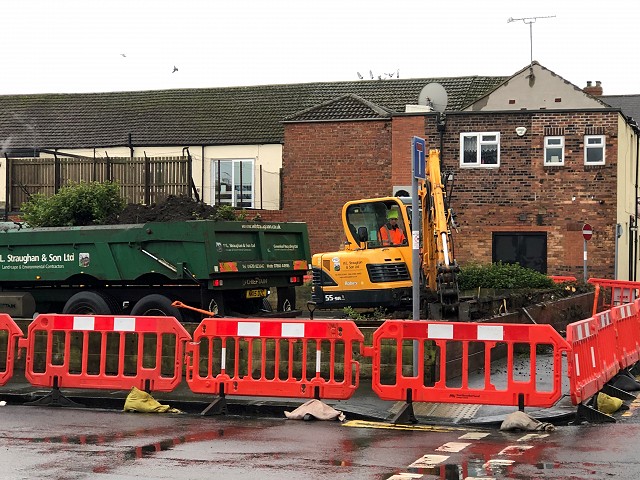 Blyth Town Council allocated £100,000 in this year’s budget to improve the High Street car park area in the Town after the Council’s original plans for Bowes Street were included in the County Council’s Local Transport Plan and have subsequently attracted major Government funding.

The wooden planters surrounding the car parks have been removed and the tarmac reinstated.  The car parks will instead be surrounded by individual planters containing trees and seasonal planting to brighten and open up the area.  Street lighting columns will also be replaced in keeping with the plans for the Bowes Street area.

The project was delayed due to the Covid-19 situation but work has now completed.

Click here to view the plan (Opens in a new window).

Undertaking the improvement of the car park area was necessary to remove the existing trees that were in the planters and were generally not in good condition.  This project was done in consultation and with the advice of Leon Savage, the County Council’s Tree and Woodland Officer.  The Town Council purchased 67 trees to replace those that were removed.  A combination of Giant Precinct Planters and Tiered Beehive planters will be used to replace the wooden planters and these will be planted with a mixture of trees and flowers.

This major project, initiated by Blyth Town Council, has now been incorporated into Northumberland County Council’s Local Transport Plan (LTP).  NCC carried out a consultation and plans were available to view at the Town Forum Showcase Event on the Market Place in September 2019.  Although the major works will be carried out by the County Council, the Town Council is still making a contribution to the development.

The Northern Gateway Project funding is great news for Blyth and the means that the development will far exceed our hopes for this area of the Town Centre.

The 67 trees that were purchased are a mixture of native varieties and fruit trees and were chosen by the County Council’s Tree and Woodland Officer.  The Giant Precinct Planters will allow fruit trees to be planted at the High Street Car Parks, in Bowes Street and Church Street.

While the Town Forum is working on long-term plans for the regeneration of the Town Centre, the Town Council have decided to continue to implement additional planting where possible.  Planters will be used so that they can be relocated if necessary once plans are known for the Market Place.

Promenade Planters were purchased for the Quayside as these are more suitable for locating along a path.  They were planted with seaside plants to compliment the area.  Plans for Parsons Street involve removal of the existing brick planter and the reinstatement of the paving.

The remainder of the planters that were moved from the Quayside were relocated around the Town as decided by the Partnership team.

The Town Council have purchased 1,400 saplings which have been planted in conjunction with the Partnership Team, Blyth Community Volunteers and other interested groups on the stretch of grassed area between Links Road and Meggies Burn.

This is an area that has been identified as suitable for extensive tree planting that will have no negative impact on the public and the trees will be able to grow and develop to their full potential without future worries regarding size. There will also be the added amenity value of a small woodland not to mention the bonus to wildlife, especially birds both resident and migratory.  A wildflower mix could also be added to further enhance the biodiversity of the area.

We planted the trees on 19 and 20 February 2020.  Thank you to everyone who joined us over the course of the two days.

Click here to read a summary of the event from Alison on behalf of Blyth Town Council.

Click here to see the article from The Journal (Opens in a new window). 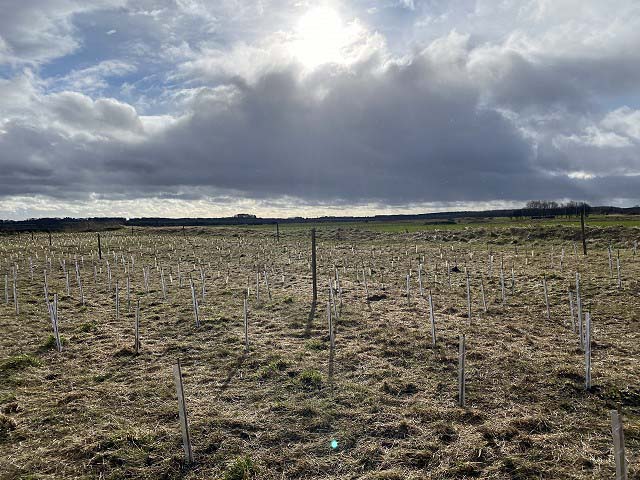 In addition to the trees being planted by the Town Council, we have been informed by Leon Savage, Tree and Woodland Officer, that Northumberland County Council have been successful in a bid through the Forestry Commission to plant 633 large trees in Northumberland.  The Urban Tree Challenge Fund has been developed in response to the government’s commitment to provide £10 million for planting both large and small trees in and around towns and cities in England.

An additional 15 barrier planters have been bought to complete the stretch on Cowpen Road outside Horton Grange School.

Spring bulb planting has been carried out at Links View, Newsham and Portland Wynd roundabout.